We braved a bit of wet and windy weather this week but in the end it was a beautiful day.  West Dunbartonshire council had asked us if we would be able to remove some of the old wooden trail posts around the Knowes.  We knew the bases were set in concrete but thought we would give it a shot.  Digging trenches around the concrete base we then attempted to lever the base and post out of the ground with a dig bar, but to no avail.  The concrete extended two feet down and was unfortunately beyond what we could reasonably remove with our hand tools.  We managed to get one post out of its base and replaced the turf in the area so we’ll consider it a partial success.

Much more successfully we went to an area in the Knowes where the banks of the local burn are covered in himalayan balsam.  Himalayan balsam is a beautiful plant originally introduced as a cheaper orchid, but which quickly spread beyond its containment and overtook waterways around the northern hemisphere and particularly in the UK.  We were late in the season but found hundreds of seed pods unburst on the plants.  Himalayan balsam out-competes native plants because its ripe seed pods burst sending seeds flying up to 7 meters.  The plants have shallow roots and die off every winter, so the banks they root in become vulnerable to erosion.  As fun as it is to burst the seed pods, since we want to keep the seed pods out of the ground we pruned the plants into bags, keeping the seeds contained.  The hope is that by removing the kilo of seed we gathered, native plants will have more opportunity to establish in the spring.  Also, the seeds are edible at any stage and are a common treat raw or cooked in their native India.  However,Always be absolutely sure of your identification before eating any wild plant 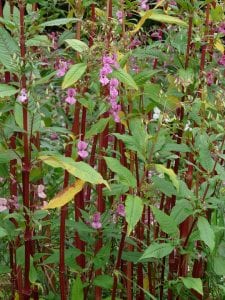